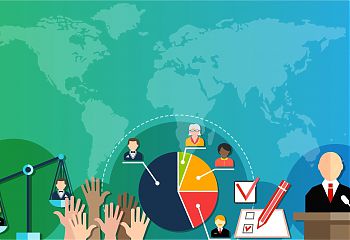 Introduction
There are three major understandings one can have through an undergraduate political science program. First, it tells you about the operation and interaction of government. Second, it informs you about the impact of a country’s policies on economic stability and growth. Finally, it instructs about the effect law has on social and political changes. Politics influences every aspect of a citizen’s life including education, employment, healthcare and housing.
After getting a degree in political science, as a young politician, graduates will make decisions for the betterment of the society by participating in political debates and getting involved in the government. Other ways you can use a political science degree is to join NGOs and support causes to make a difference in the society or candid yourself individually and make your ideas and proposals be heard.
There are many fields of study offered in Political Science; such as, domestic politics, comparative politics, international relations, political theory, public administration and public policy. Students at Kateb University study Political Science and Political Theory which are the study of contemporary theoretical perspectives such as constructivism, critical theory and postmodernism.

We are Education, create your passion and inspiration. And hope success will come for your dream. Please send email and get latest news.